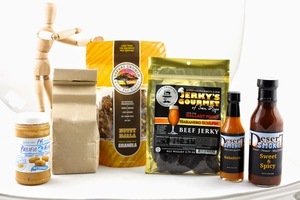 not yet rated
Ships to:
snacks

War Foodie is a monthly subscription box that brings American favorites to military and expat communities. Our customizable boxes include: Coffee, Hot Sauce, Beef Jerky, BBQ Sauce, Peanut Butter, and Granola. War Foodie's unique organization has a very special mission: Getting the best stuff out to hardest to reach places, consistently. Americans serving overseas quickly discover that the landscape for food rapidly changes, and beloved basics are often missing in local markets. Being former military, War Foodie knows what it’s like to have awful food. War Foodie reached out to Military and Expat communities, sampled the highest quality foods on the market, and put together packages that are unashamedly American. Whether stationed in a remote base in Afghanistan or a consulate in Angola or simply a forgotten base in Arkansas, our team knows this will make your life better.

$20.00
per delivery
Cancelled
Write A Review
Must be logged in to write a review.