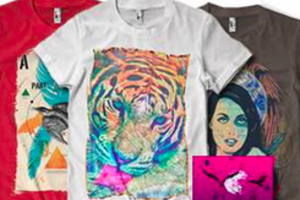 Threaded Canvas is an indie t-shirt and art subscription box. Each month you receive 3 new shirts and a framable art print.

$25.00
per delivery
Cancelled
Write A Review
Jess
You really need to put up a warning about this box. I made the mistake of subscribing for a year in October 2014. Right from the start, each box arrived 1-2 months late. Customer support was always unresponsive. Each box is supposed to come with 3 shirts in varying colors with different prints, an art print, a bookmark/magnet/sticker, and a button. I did like the shirts and the prints, especially at first, they seemed to put a lot of thought into it, even if they shipped quite late. My last box was supposed to be September 2015. Today is January 8, 2015 and I just received that box. When I opened the box, I was first overwhelmed by the smell. Everything inside smelled of manure. The outside of the box did NOT have this smell, so it wasn't something it picked up during shipping. Second, every single shirt inside was plain white, one print was from the box I received previous to this one. The art print was cut in half, with only one half inside the box. Not only did they not bother to apologize for being 5 months late, they made it quite clear, they couldn't care less. Absolutely steer clear of this company and any of their products, they are deplorable.
rating n/a
Jordan
I have been fighting a loosing battle (I fear) for months now. I have paid for two boxes now and months later I haven't gotten more than a tracking number that won't update. I they refuse to offer me a refund after I've asked multiple times. They just keep sending replacement boxes that I don't think are real. My tracking numbers have never updated, and they just keep saying they'll send more. I refuse to believe the USPS has gotten five packages --with all the replacements they supposedly sent--lost at this point. DO NOT waste your money, because on the off chance you don't get your package, you will not be getting it back. I can't even believe the level of professionalism this company is displaying. When I try calling, they actually hang up on my call mid ring. I'm so upset by this! I don't know the legalities behind this or how I can get any justice here, but I think I'm literally being robbed here.
rating n/a
Susan
I have been trying to get issues resolved with this company for over 6 months. They send their boxes out really late and some months you never get your box. They try to appease you by saying that they are taking care of the issue and giving you tracking #s that never ship. Save yourself the trouble and money- don't bother with this company. They don't even know what customer service is!!! I have cancelled - too bad because I really enjoyed some of the shirts.
Customer service
Retail value
Quality of products
view more reviews (5)
Must be logged in to write a review.