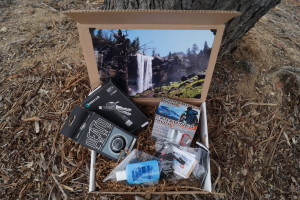 The premier subscription box for the outdoors/adventure. Each product is tested by a world-class adventurer in the field and given a "stamp of approval" before it goes in the box. We donate a portion of sales to help preserve the environment. We emphasize high-end products with multiple functions and new technology integrated. Nomadik bills and ships every other month.

Deal Alert!
Click Here to get 20% off + free shipping
$31.00
Subscribe
Write A Review
User
The worst customer service! I was intrigued by the advertising, and while I enjoy the outdoors, my son is VERY much the enthusiast. So I thought I would get the monthly subscription and try it out, according to the site, with this option you could "cancel at any time". Sounds good. I finally received the first box about 6 weeks after I subscribed. It seemed to just be a timing thing, so ultimately that was no big deal. I would see the charge on my credit card and about a month later a box would come. Some of the boxes were certainly cooler than others, and I liked seeing the different products. As with anything like this, not everything is intriguing. But overall, I felt the value was more or less there. So, after several boxes, I decided that I just didn't want to shell out the $37 a month, I wasn't really taking advantage of the products, I was kind of meh on the whole thing. So, since I had signed up for the monthly, I could cancel any time....NOT! This would start a several month battle and ridiculous amount of frustration. First I tried to log into my account. For some reason I couldn't. (i was able to later, could have been just a glitch in my internet, or firewall, or whatever cyber voodoo sometimes happens, but it was a bit of an issue) so this is what started, what would eventually turn into 3 months of frustration. So, I go to the contact. There is no way to contact them other than email. I reached out via email, explained the situation. The auto responder says they will reach back out in 48 hours. I never received response. Several more days go by, and I get an email : "Since we have not heard from you we have closed this..." What? I never heard from anybody. So I respond to the email, and say basically that. 2 days later i get another email, with a screen shot of the email that is nowhere in my email box (not spam/not junk/ no where) with a snippit comment. This is the email that was sent to you. This type of transaction goes back and forth, with no real answers, just weird canned responses. So, I am finally able to log in to my account. I follow their process, which is basically send them an email and tell them you want to cancel. I did. They didn't. I do it again, and send an email from a different account. All say the same thing. Cancel. I finally get a response. I presume it is resolved. Nope. There is the charge to my credit. After several, all caps emails from 2 different email accounts, and again, and i can't stress this enough, following their procedure, I believe we my finally have this resolved. We will see. I finally had to threaten to report them as fraud to my credit card company. I hate being that person. I just wanted to stop the subscription. So if you are enjoying the program great! You want to give it a try, you might like it, it is pretty cool, but be aware, I am not the only person who has had issue with their customer service, and while I always try to be positive, and maybe my transaction was an anomaly...the frustration was very real and ultimately expensive.
Shipping
Customer service
Retail value
Quality of products
Curation
Ease of canceling
User
Absolutely the worst customer service.
Shipping
Customer service
Retail value
Quality of products
Curation
Ease of canceling