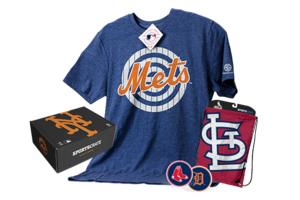 Fuel Your Fandom
Ditch the parking lots and long lines by getting exclusive team gear and collectibles delivered right to your door.
You're a big fan. We're big fans. That’s why we’re offering every subscriber the VIP chance of a lifetime with your favorite team: ride the bus, chill in the dugout, throw out the first pitch and more.

$29.99
per delivery
Subscribe
Write A Review
User
Was very excited about getting new Astros gear that wasn't the same as everyone else in the stands. Received the winter gear - gloves and scarf which are warm. Playing cards and lanyard. Ok. Fast forward it's now May and I'm still waiting on my Spring Training box that was supposed to ship in February. AND still waiting on my April box. Received an email saying they had some issues and would notify when they would be shipped. As of now the February Spring Training box will possibly ship in June. At this rate, the season will be over before I even receive any of my boxes or team gear.
Shipping
Customer service
Retail value
Quality of products
Curation
Ease of canceling
Must be logged in to write a review.