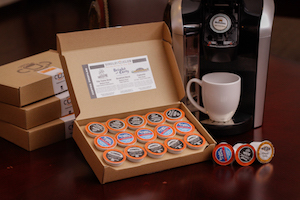 "Single Cup Club is a subscription box that features small batch roast coffees in the convenience of a K-Cup. Each month we feature three different coffees and customers get 5 cups of each coffee (15 in total). The coffees range from darker roasts to lighter breakfast roasts and each month with have a ""fun"" coffee that compliments the season."

Deal Alert!
Click Here to get your first monthly box for $10, including shipping (BOX10) or Save 20% off the 12-month subscription (COFFEEADDICT20)
$18.98
per delivery
Subscribe
Write A Review

Dynal
I ordered the three month subscription and it has been great. Each month I get to try three new flavors and/or types of coffee. This box is a great way to try something new, then if I love it I can always order more. I can't wait to see what comes in next month!
rating n/a

Rosey
I'm telling you, this is THE subscription to have!! I am on my third monthly box, and each box has had three different flavors in it (nine flavors total on this third month) that I have not tried, or even seen in stores!! I have loved every single box. I leave it on my counter next to the Keurig and everyone who sees it gets excited!! If you're going to have something come to your house each and every month, this is the thing you want to have. 5 stars from me, it's my new favorite!! Fast delivery, packaged well. Great gift idea too!! I may get my mom a subscription for Mothers' Day or her birthday.
Shipping

Leslie
I’ve been hearing people talk about Keurigs since . . . well, forever it seems like! But I never thought of wanting one. In a happy coincidence, right around the same time my first box of coffee arrived, we also received a Keurig as a gift. I still prefer my automatic drip coffee maker–the Keurig cannot get it strong enough for my tastes–but John enjoys it and now he makes his own coffee so yay for that too. I love these monthly subscription deals. I mean, really, I’m a sucker for them and I belong to several that I am NOT getting in exchange for blogging about them! So even though I think that the Single Cup Club is a little more expensive than the best deals you can find out there for Keurig-compatible coffee pods, the fun factor and the convenience of not having to look for deals and remember to order each month offsets that. It’s also fun to get new kinds of coffee to try. Each kind is distinct. We’ve gotten to try six so far. My husband has liked all of them and he tells me that they are stronger than all the various samples that came with the Keurig. The weakness of Keurig-made coffee is a common complaint, so that sounds like a plus to me. The helpful folks at the Single Cup Club also include a little adapter thing in the box of coffee, so that the next time you have that maddening experience of trying to use a non-Keurig pod which looks like it should work but it won’t . . . now it will! So really it comes down to whether you are willing to pay a little extra for the fun of trying out some delicious new coffees and the convenience of having them delivered regularly to your door–and on whether you use a Keurig, of course!
rating n/a
Must be logged in to write a review.

Get your first monthly box for $10, including shipping (BOX10) or Save 20% off the 12-month subscription (COFFEEADDICT20)