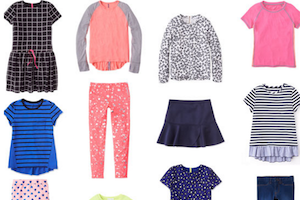 "You'll receive 12 outfit-ready items (11 clothing and 1 accessory), available in sizes 2-14. Based on what you like or don’t like, we’ll hand-pick 12 items for you. You’ll receive a delivery 4 times a year. No membership fees. No shipping fees. Choose your faves, you’re only charged for what you keep. Each item is valued $12–$36. We currently ship to the continental United States. (Alaska, Hawaii, Puerto Rico, and the U.S. Virgin Islands are in the works.)

$0.00
per quarter
Subscribe
Write A Review
User
The clothes were very cute, but the fit was REALLY big for my son and my daughter. I got double-charged and working with customer service to resolve the issue was time-consuming and frustrating. They kind of treated me like dirt. I was not impressed and I have moved on to KIDBOX, which is cheaper and better to work with!
rating n/a

April
I decided to give this a try November of last year. I never received anything from them but their site had 3 packages totalling almosy $800 status as delivered. I emailed them and told them I never got anything. They told me they weren't going to charge me for the missing items. I decided not to ask for another package, as the value was too high and it was scary to be on the hook if it happened again. Today, 5 months later, we went grocery shopping only to discover our account is withdrawn over $300. Called the bank and Rockets of Awesome, out of nowhere has taken all our money and then some. They've withdrawn a total of $798, for what, idk. I never ordered again or received a thing from them. So, I am livid. We are destitute. Beware.
Shipping
Customer service
Retail value
Quality of products
Curation
Ease of canceling
Must be logged in to write a review.