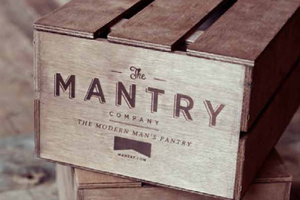 Mantry helps you create "The Modern Man's Pantry". This bi-monthly food subscription box contains 5-6 full-size premium food products from artisans across the US.

The products packed into each wooden Mantry crate have been painstakingly curated around different monthly themes (like "Bacon Nation" and "Bourbon BBQ") and are 100% made in the U.S.A.

This charitable subscription box donates 1% of its sales to City Harvest, which is helping rescue over 20 tons of food to redistribute to families in need.

$75.00
every other month
Subscribe
Write A Review
User
I signed up for Mantry and received the first box. Things have changed since the reviews obviously. The fist box arrives in a crate inside a cardboard box. Additional boxes allegedly arrive in just the cardboard box. The paperwork was a single piece of card telling me to check their website for details on the box. The "theme" was "biergarten 2" and the box contained the promised six items. Wilder sweet and hot mustard - the best thing in the box and both my wife and I like it. Icky Pickle - they're ok, but neither my wife nor I would bother with them again. 4 hard Pretzels - these tasted good, but the box was smashed inside the crate, and this was a bag of pretzel pieces by the time it arrived. Muesli - I didn't realise that Muesli was a biergarten thing... It is decent muesli, but for the price I would rather make my own. Beer beef Jerky - it was ok. The spices overpowered any beer flavour that there might have been. I have had much better jerky, locally made. La querca salami - the most disappointing item in the box. My online price comparison had this as the most expensive item in the box. The salami tasted ok, but the texture was much looser than I am used to. The price is almost double that of Olympic Provisions salamis, and I prefer them. I priced the individual components online and the entire box came to about $53. I don't see the value, the collection seemed bizarre (muesli in a biergarten?) and the packing was insufficient to protect the pretzels in transport.
Shipping
Customer service
Retail value
Quality of products
Curation
Ease of canceling

Katie
I just got my husband a Mantry box for our anniversary. We were very disappointed. The contents of the box only totaled about $35. For something that cost $75 I would expect something a little closer to the paid value. It's a neat idea, very manly. But no where near the paid value.
rating n/a
Must be logged in to write a review.