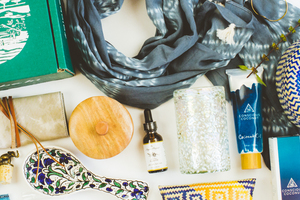 The Essential membership provides monthly credit to access and purchase discounted items, or you can opt-in to receive a surprise item instead from GlobeIn's collection of handmade & fair trade artisanal products from around the world.

$10.00
per delivery
Cancelled
Write A Review

Angy
I just received my first box and received the "Savour" one. I am completely blown away by how beautiful the salt and pepper shaker with matching spoon rest are. I absolutely love everything I received. I was supposed to receive the set of wine glasses with my first box, but they were not included, I contacted customer service via e-mail and had a reply within the hour and the glasses were sent out the same day. Excellent customer service and beautiful items. Can't wait for my next box.
rating n/a

Linda
The GlobeIn Club Box is a great introduction to GlobeIn. When I first subscribed, I worried that I would receive a decorative little trinket each month that would have no purpose other than to adorn my mantel. However, I've been happily proved wrong. I've received two Club boxes so far, and both had an item that had a purpose and was useful. The December Club Box featured 3oz of natural sea salt from Pangasinan in the Philippines packaged in a small palm leaf box. With each box, GlobeIn includes a photo card showing the people and the process that created the product, and the back has more detailed information. I may not be able to budget in a subscription to GlobeIn's larger Artisan Box at this time, but by subscribing to the Club Box, I'm positive that I would have just as great an experience with a greater positive impact on the communities and regions that the products come from.
rating n/a
Must be logged in to write a review.