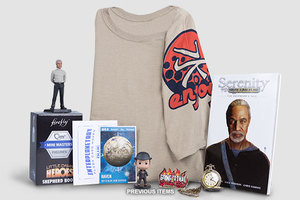 A Bi-Monthly Crate of Official Firefly Gear & Collectibles The Firefly™ Cargo Crate is a mystery subscription service delivering a collection of 5-7 exclusive Firefly collectibles, Including shiny figures, cunning apparel and other such finery every 2 months. Every crate has a $65+ value! The best loot in the Verse -- For Browncoats, by Browncoats

Deal Alert!
Click Here to save 10% off any length subscription, or $3 off month-to-month
$41.99
every other month
Subscribe
Write A Review
User
It is now December 14 2018. The Firefly crates are so far behind that I fear they will never ship. The crate I paid for on Jun 15th 2018 has not shipped and is still at TBD (to be determined) The crate I bought on August 15th is the same , as is the October 15th crate. They are half a year behind! Over 6 months. Tomorrow will be December 15th. Loot Crate is scheduled to take another $50.89 out of my account. That will be for the forth crate that they owe subscribers and a total of $203.56 of my money while I wait to see if they deliver. I cannot just quit. All my crates are unopened and I am saving them to resell as a complete set. If you didn't start at the beginning, run far away from this company, customer service has no answers and just closed the chat box.
Shipping
Customer service
Retail value
Quality of products
Curation
Ease of canceling
Tabitha
If you're thinking about subscribing to this box, just don't. The box has pretty much not gone out on time since the end of 2017. E-mail after e-mail about "we're sorry, we're working on getting this to you as quickly as we can, suppliers delaying, blahblahblah". It gets old after you've heard it half a dozen times. And the "big/amazing" 2-year crate they promised had a set of posters of all of the main cast members, which is fine if you have an entire wall to wallpaper in posters, which I don't. Items in the boxes have gotten cheaper and flimsier as the boxes have progressed, even though LootCrate did their biggest price increase on this box. Crappy t-shirt after crappy t-shirt with a couple of other cheap items thrown in. Raised prices on shipping to, but when the box FINALLY is shipped out, it takes longer than it ever has before. So no, just no. I cancelled my subscription after the Shindig box was announced (still waiting on it though, 2 months later).
Shipping
Customer service
Retail value
Quality of products
Curation
Ease of canceling
User
Firefly loot crate was doing fine until around the end of 2017, when their entire company was having issues. I've only been subscribed since January 2017 (and I ordered Wash's crate off loot vault) but I've already had problems with getting my stuff. my River crate wasn't even sent out so I had to tell them, hey I didn't get my stuff. The December crate was disappointing and over a month late, the January crate still hasn't arrived (It's mid-march now) and now they're already advertising the may crate before even mentioning when the March crate is gonna be shipped out. If they don't catch up, I'm out once I have a figure of every character.
Shipping
Customer service
Retail value
Quality of products
Curation
Ease of canceling
Must be logged in to write a review.