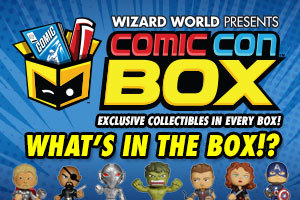 William
I just got the February Mercenaries Themed box.... I should have stayed away from this box based on initial reviews but it seemed like they had learned their lesson! Deadpool suspenders and one of those cheap paper star wars figures is a big FAIL here, also the theme made no sense. At least if it had been a Bobo Fett paper figure instead of Darth Vader, but in addition to the 2 items that fit the theme, there was a Death note vinyl figure, and an Attack on Titan t-shirt. 2/5 items fit theme, 2/5 items were pretty fail, Death note vinyl figure was zzzzzzz. Stay away from this box guys.
rating n/a
J.
I just got my first box from these guys and it was amazing. First of all, it was double boxed with lots of packing bubbles to keep the actual box safe. Since my lootcrate came slightly crushed, I really appreciated the care. The exclusive t-shirt was hysterical and adorable. My girlfriend has informed me she plans on stealing it. :) The exclusive art print and comic variants were also well protected in their own sleeves with cardboard backs for the comics, as well. The mug was an excellent size and excellent quality. Even the small 'filler' items were actually very fun. So far this is tied with my Marvel Collector Corp subscription for Best Box Ever award. Highly recommend.
Shipping
Retail value
Quality of products
Curation
Must be logged in to write a review.