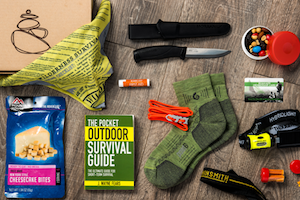 Every month, you’ll receive a box of products that cater to an outdoor lifestyle. Cairn works hard to curate products that recreational enthusiasts will love. Sample categories that may be included in box: Gear, Apparel, Food/Energy, Skincare, Emergency/Medical

Deal Alert!
Click Here to save 20% off your first box when you sign up for a 6 or 12-month subscription!
$29.95
per delivery
Subscribe
Write A Review
contrabandit
I wanted a box to help get my outdoor gear up to snuff for camping beyond the car. I thought this box would be a nice addition to my gear line since I dont have all day to browse around REI. Here is the deal, I have had Cairn for about 5 months now and its SUUUPER hit and miss. You get more than the total value of the box each time, but some of the stuff isn't functional or quality enough for most folks. I was super salty over getting a collapsible bowl and mini containers. Wtf am I gonna use teenie tiny containers for while camping? Paperclips? Smh. Their is zero personalization, even though you fill out a survey thing. The energy bars they include in each box straight up suck. This isn't a box its more a cardboard mailer. I also was sent a water resistant fanny pack, which would have been cool, but since its not water proof, I have no use for it either in my kayak or SUP. Too ugly to wear anywhere. I have got some cool things tho. The firebiner is super cool(even though I already had one), a got a nice trash pack and poo shovel, as well as a super nice sleeping bag liner(which i actually needed). The solar light is rad as well and I had used it a bunch since getting it. Cairn has higher quality boxes beside the $30 one. One of my friends swears by the more expensive option. I may try it out soon as well. Out of the 5 boxes I've had, I've been miffed about 2 of them. Usually at least 1 thing is good. 1 good item for $30/month isn't too great a record.. Its a bummer they don't add camp food instead of whack energy bars...which are consistently gross. As a company, they have a pretty cool return your old gear program and discounts on high end gear. The box is frustrating because they have SUCH quality stuff in their "store", but this box is midrange camp stuff. I'm probably going to upgrade from the basic subscription, but im a bit worried since there isnt much consistency in quality/value.
Shipping
Customer service
Retail value
Quality of products
Curation
Ease of canceling
User
Absolutely disappointing. Each box has a total value of less than $12. You will receive 2-3 items. The photos of boxes shown are fake and most of the positive reviews are either fake or maybe very old when more items were sent. Come on, I can get a granola bar at the store, I don't need to spend $20 for one.
Shipping
Customer service
Retail value
Quality of products
Curation
Ease of canceling
LeAnn
I have been a member for 3 months and the first two months were great. The first box I new what I was getting and I was excited it came with the day pack, bottle and/or camel pack cleaner and the snack bar. It was great! Second box I got the head lamp, collapsible bottle (which is great for the cleaners I got in the previous box) , and the snack bar. At this point I was think how great Cairn is and decided to pay for 6 months. Then my third box (February 2018) I was getting excited because I saw some (7) unboxings and they had the life straw in them and this beeswax stuff. I was thinking great I love how they keep building on past boxes. So when I received my box I was like wth it was a slightly different from my first box (bag, utensils, zipper fix, and snack bar) I felt like they ran out of stuff and just threw something together. Definitely regretted paying for 6 months. I am hoping it gets better and I totally loved my first two boxes but 2 out of the 3 boxes being the same; come on. I know Cairn is better than that and I have hope for future boxes.
Shipping
Customer service
Retail value
Quality of products
Curation
view more reviews (3)
Must be logged in to write a review.