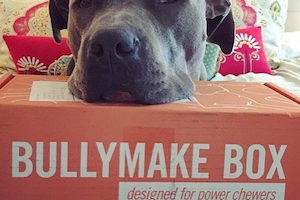 A Bullymake Box is a box that is designed specifically for power chewing dogs. Each Bullymake Box features long lasting and durable items built for rugged chewers! 4-5 super premium toys and treats are hand selected for your dog(s) each month by their weight.

Deal Alert!
Click Here to save $5 off your first box!
$39.00
per month
Subscribe
Write A Review
Kelley
My girls are loving this box. I've got it customized to not send any treats and get toys only. The rubber treat dispensers were not enjoyed as much as the nylon and rope toys, so I had it swapped out for a second rope toy instead. Super easy and accommodating. I was able to put my subscription on hold when I needed, and re-activating it was a breeze.
Shipping
Customer service
Retail value
Quality of products
Curation
Katy
Excellent USA made toys with fast shipping. We loved the February 2020 box - it was so cute. The heart toy was perfect coupled with Cupid's Wings! We will be customers for a long time. Very high quality stuff. Pleased with our purchase - and my dog is too!
Shipping
Customer service
Retail value
Quality of products
Curation
Ease of canceling
Jess
I'm on my second month of the Bullymake box. I have a pittie mix who constantly destroys toys, so I decided to give this a shot. The first box did take over a week to arrive (I live in Missouri and it came from Kansas) AFTER I was sent the tracking number. It sat in Texas for DAYS. I didn't think a lot about it the first time, but now I'm on my second month. I got a notification that my package shipped on the 22nd of this month. Days passed and it had not been delivered to USPS yet. It went out on a saturday, so I contacted them on Wednesday and asked them what was going on - that my package had not moved. They said if I wanted it faster, I could choose $10 shipping. I declined. I was told they "ship out thousands of boxes every day, so...." Then, I got a message yesterday from USPS that it had delivered, but it was not at my house, so I notified Bullymake. They said it hadn't even been transferred to USPS yet (DAYS later) from their "carrier service", so I checked the tracking again, and it said "in transit". They said I'd probably get it Monday, March 2nd, and then I got a notification that it delivered today. Moral of the story - be prepared to wait about 10 days after it "ships" for their "carrier service" to actually get it to the USPS. I complained several times and was not offered a good explanation or some sort of reimbursement or something. Even though my dog enjoys the toys and cannot destroy them, I'm thinking I'll have to cancel because of inconsistencies in shipping. Their location is 8 hours from my location, and it's taken 6 days to arrive to me. If you live on the coasts, I wouldn't even bother.
Shipping
Customer service
Retail value
Quality of products
Curation
Ease of canceling
view more reviews (21)
Must be logged in to write a review.