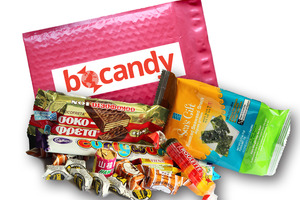 Bocandy is a monthly snack subscription service that specializes in sweet treats and snack foods from around the world. As they put it on their site, Bocandy's products are "imported, exotic, new, and hard-to-find."

Bocandy has a bunch of subscription options to choose from:

Deal Alert!
Click Here to save 15% off any subscription!
$9.99
per delivery
Cancelled
Write A Review

Shirley
I tried their snack box a few years ago and was disappointed. I Bought a groupon for the Jerky company for my son who is 8 and loves beef jerky. I sent a email asking when it will be sent with no reply. Over a month and a half i receive a package of jerky that looked nothing like what i should have got. Should have received 5 or 6 big bags and different flavors. I received 4 small 1 oz bags of chipolte and sriacha. Both very spicy and really small. Not something my son or me likes. I got ripped off from this company. STAY FAR AWAY FROM THEM. They don't respond to emails or any kind of messages you send them. No response either from their social media sites.
Shipping
Customer service
Retail value
Quality of products
Curation
Ease of canceling

Breanna
I would say im very disappointed in Bocabdy i ordered my box july 2nd and received it August 19th and my box was filled with all Mexican candy which i could go to any store near me and buy so nothing special. They need to have more info on shipping and tracking orders too so even though they answered any questions i had. they just need to be more informative
Shipping
Customer service
Retail value
Quality of products
Curation
Ease of canceling
User
I wouldn't reccomend Bocandy. The boxes used to be good, and they used to arrive every month. Now, each month is a handful of assorted candies from mexico (No hate to the country, but variety is good, plus I live in SoCal, so mexican candy is something I already have access to) and maybe one japanese candy if you're lucky. Not only that, but on multiple occasions I have been charged for a box I never received! After the first occasion I was sent two of the same box one month, so I assumed that was bocandy's way of apologizing for accidentally not sending me the product I paid for? (Although it was once again a handful of spicy mexican candies and I only got to enjoy two of the candies out of all the rest) This has happened again, though, and I contacted blake about this, and have not recieved a response. In short: Didn't get a box for each month I paid for, selection is sub-par, and customer service is lacking.
rating n/a
view more reviews (14)
Must be logged in to write a review.

Save 15% off any subscription!