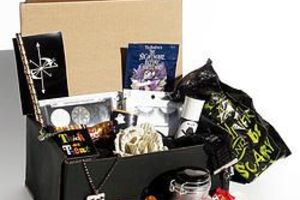 Black Box is a new subscription box for gothic and other subcultures. Get accessories, candies, makeup, jewelry, music, art, and more delivered right to your door! Also every month's box comes with a bottle of black nail polish. Available in a standard ($20/month) or Deluxe box ($40/month).

Nicole
DO NOT SUBSCRIBE TOO THIS!!!! First off, the scam artist owner said on the company Facebook page ( which has been deleted btw) that she was no longer going to be doing it. She said on Feb 1 she would be mailing out Feb box and suspending the auto payments. NEVER DID IT!! Nor sent boxes! I paid for Decembers box, it never came. Paid for January, it came. And was NOT the original theme. The theme was supposed too be "6 feet under" she changed it too an Egyptian theme. I literally can use nothing from that box. Feb the owner said this was the last month and she would be suspending the auto payments throughout the month. She never send the Feb box, or stopped taking the money. She then proceeded to take payments out March, April and May. Finally my bank cancelled my debit card to make it stop. She never replied too emails , DM's or Facebook post. In fact, everytime I would post on the business page she would delete it. SCAM ARTIST! Shes taking subscribers money and refusing to refund it. Now I have the unnecessary headache of redoing all my online payments and dealing with her not responding to my bank trying to get the money back, all because she wouldnt honor her word. Karma is gonna get her, but dont let her, get you.
rating n/a
ravenesque
I was excited to try this subscription; I was hoping it would be similar to the Spooky Box available in the UK but is too expensive for the US due to the high shipping fee. I got the standard June 2016 Spellbound box as my first box, which is $23 including shipping. I also ordered the standard Nevermore box for July. I want to keep this as succinct as possible, so basically I will say that I will not be purchasing boxes from this business again. The owner is not timely about responding to emails and concerns, or ignores them all together. My frustrations came from the fact that both boxes were extremely late in being sent out. The Spellbound box was actually held for over a week before sent, and the Nevermore box never came. The owner was nice enough to replace the Nevermore box with the deluxe version, because the standard box was "lost" by the post office (which I still haven't gotten, 3 weeks after being sent out). She only offered this after I sent another email stating how frustrated I was because I felt like my emails were being ignored with no responses, even though I try to be as nice as possible because I didn't want to just be ripped off. I finally got both boxes several weeks after release. So, delays in shipping and failure to communicate are the main reasons I will not be purchasing again. The other reason I will not subscribe again is because you are not able to manage your subscription yourself; you can't just sign in and change your subscription, update information, etc. You have to contact the owner, but when they don't respond in a timely manner, it is stressful. I wish they used PayPal as a subscription payment method, then I can manage it myself from my own end. The boxes themselves are okay. I don't think the Spellbound box was worth the price that I paid for it although some of the items were nice. But, many of the items are not usable for me; I am unsure what to do with them. I am not a witchy type; what do I do with the black salt? (before you ask, the Spellbound box was never one I wanted; I accidentally made two payments, and the owner used one of the payments towards the Spellbound box rather than refund me). The Nevermore box was much better! All of the items were relevant to the theme, and well put together. However, the Deluxe box is shaped like a coffin, which is awesome, but it was not taped well. When I got it, it was partially torn. Luckily, nothing fell out or was damaged.
Shipping
Customer service
Retail value
Quality of products
Curation
Ease of canceling

Nyx
Currently on my 3rd month of the deluxe box and I have to say I'm thrilled! Handmade jewelry is beautiful and many items came directly from my survey of things I was looking for. It's really helped me in my lacking accessories and makeup department. My favorite thing so far was the Mourning Glory perfume in my first box, it smells amazing!
Shipping
Customer service
Retail value
Quality of products
Curation
view more reviews (4)
Must be logged in to write a review.