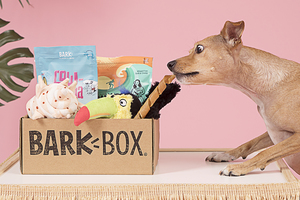 BarkBox is a monthly subscription box for dogs. Every month they send your pup a package full of toys and healthy and nutritious treats based on your dog's size. Sign up for a 6 month subscription for major savings - only $25 a month!

Jordan
We just got our first bark box this month. It was the Paris themed box and it wasn't my favorite. The treats were amazing though and my dogs definitely loved them
Shipping
Customer service
Retail value
Quality of products
Curation

Betsy
I adopted Harry in September of 2019. Harry is a special boy who is beyond any Super Chewer dog I have ever seen and is able to chew up things I never thought possible. I subscribed to the Super Chewer Box in an effort to find toys that Harry could not destroy in 10 minutes or less. There are several that he loves. Unfortunately, six months after adoption, when Harry was just under 2 years old, I went on a cruise. While at sea and Harry with a pet sitter, he ingested part of a Bark Box toy that was not SUPER CHEWER resistant. After excessive vomiting and diarrhea, my daughter came over and rushed him to the vet, and then on to the vet hospital. After emergency surgery resulting from the toy, the vet bills came to over $3,800.00. Which my daughter graciously paid. I got home from the cruise owing my daughter insurmountable compensation. I contacted Bark Box immediately. They called me that same day and asked the details of my experience. They were very caring and understanding and immediately cancelled my Bark Box subscription. I sent them copies of the bills and spoke with their rep on the phone more than once and emailed back-and-forth a lot. He was understanding and helpful and within a month of contacting them I received a check paying 100% of the vet bills. I can't thank the Bark box company enough for making restitution and for handling it so quickly so I could pay my daughter back. While he can't have any new toys, Harry still enjoys the SUPER CHEWER toys that are extra durable, and he enjoys the Bark Box Treats Only box each month which he LOVES! Betsy F.
rating n/a 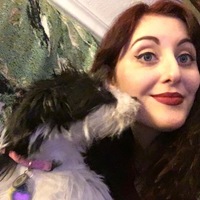 Isabella
I really enjoy Barkbox! The curation of the box is so clever. It actually has a really good value if you compare to going to a pet store and imagine buying all these items individually. Happy puppies here!
rating n/a
view more reviews (46)
Must be logged in to write a review.

What is BarkBox & how does it work?

How much does BarkBox cost? Do you have a BarkBox promo code?

What is Super Chewer?

How do I get in touch with BarkBox customer service? Do they have a phone number?