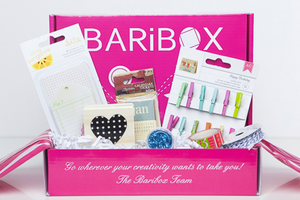 BariBox is a new subscription box geared toward anyone who loves crafting with paper. 5-10 paper-crafting products. Products will span a number of categories; from tools to paper, stickers to ribbon, etc.

$12.99
per delivery
Cancelled
Write A Review

Andrea
I had this box for almost a year, $38 for three months...my daughter loved it, she got many high quality craft items and it was well worth the money. However, last month when they took out my payment of $38 for the next three months, they credited it back to my account a day later, and she did not receive a box this month. I am assuming they have gone out of business.
rating n/a

Teresa
Oh and they NEVER contacted me back. None of my e-mails ever garnered a response.
Shipping
Customer service
Retail value
Quality of products
Curation
Ease of canceling

Teresa
Well I finally got a box from them and I have to say I will not get another. Their customer service is awful, I contacted them 4x over two months about not getting a box after subscribing in December and them taking a payment in January. They also tried to take another payment in February but it didn't go through because I use a prepaid card for the first couple of boxes from companies that I don't know much about. So, after threatening them with the Better Business Bureau and American Express I finally got a box. It's not even worth what I paid. I got a small Ziploc baggie of precolored wooden shapes, (not a factory pack, just a handful thrown in a common household Ziploc sandwich bag), two sheets of stickers, a mini stamp pad, and two sheets of adhesive wooden scrollwork. Nothing was in the original package, it really reminded me of nothing more than someone's craft leftovers tossed in a box and sent out. I would have thought that they would have tried to impress me after I had to threaten them to get ANYTHING. But oh well, live and learn.
Shipping
Customer service
Retail value
Quality of products
Curation
Ease of canceling
view more reviews (3)
Must be logged in to write a review.