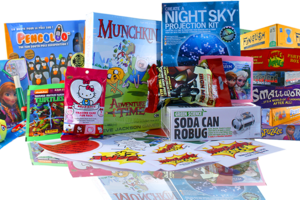 By handpicking products that have been thoroughly researched and tested, we assure to only send you products that are Awesome approved. Awesome Pack are proud to introduce you to a wide variety of exciting games and activities in order to give you that "WOW" factor every month! Each Awesome Pack contains products from each of the following categories: Awesomely Unique Board Games, Hands-on Fun Activities, Cool activities like magic marker books, card games, mini games, puzzles, and the Awesome Activity Book and Goodies

Samantha
I put an order in in march, still have yet to receive it. You then took our aprils payment before I could even get the chance to say skip. Yet to receive April's box as well. I have emailed several times with not so much as a screw you as a response. I'm highly upset this is beyond a ripoff.
Shipping
Customer service
Retail value
Quality of products
Curation
Ease of canceling
Jen
I wasn't able to add to my first review, but wanted to add that I received the box and it was a complete and utter disaster. The two main items were games (an Orphan Black card game and hard rock trivia game) that in no way reflected any of the interests that we listed on their survey. Of the other two items-one was another total miss (a Call of Duty Mega Blocks kit). The only item that reflected our preferences, which was also the one with the lowest value, was a teeny tiny puzzle. I filled out the survey for my sister and me and put that we liked things like puzzles, cats, Harry Potter and mysteries-definitely no Call of Duty, Orphan Black or hard rock. I am very glad that I cancelled the box.
rating n/a
Jen
I signed up for a month-to-month subscription to Awesome Box on 6/23. When I realized that I wouldn't be sent the 1st box until after being charged for the 2nd, I skipped the following month. It's a good thing I skipped August as my July box was not mailed until 8/21 and I have yet to receive it. According to the company's welcome email, the box should have been shipped sometime during the last 2 weeks of July. I never received an email about the shipping being delayed-in fact I actually received an email on 7/31 stating that the box was going out that week. So, basically, they lied about the shipping and it is so delayed that, if I hadn't skipped August, I would be about to be charged for a 3rd box when I haven't even received the 1st! I can't speak to the contents as I probably won't receive the box until the end of this week at the earliest, but I've already cancelled it based on the company's dishonesty about shipping.
rating n/a
view more reviews (5)
Must be logged in to write a review.